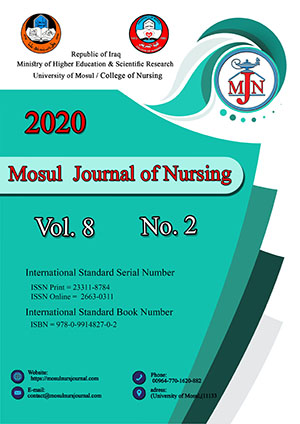 Aim :To study the prevalence of carpal tunnel syndrome among over use of computer mouse in Mosul University employees.
Method: A cross sectional design study was adopted in a purposive sample of (138) employees using computer in a daily working hours at Mosul University, the sample include both faculty members and administrators. Certain variables such as age, gender and the period of experience of computer work. The investigators use a clinical examination (a Phalen test, Pin Prick and Tournquit test) & nerve conduction test for diagnosis of problem among participants.
Results: Female employees uses computer more than males (92:46). The highest prevalence of carpal tunnel syndrome was found among age group (31-35) with (31%), and among females more than males (2:1). Bachelor employee represent 55.07% of the study sample. The study also found that pregnancy was the most common risk factor among female participants while obesity was the major risk factor among male. The use of analgesia to relieve the symptoms was predominant measure among affected employees.
Recommendation: avoidance of repetitive trauma for the wrist or any continuous pressure  created by excessive use of computer's mouse,  and weight reduction.


Introduction
Carpal tunnel syndrome is an entrapment neuropathy that occurs when the median nerve at the wrist is compressed by a thickened flexor tendon sheath, skeletal encroachment, edema or soft tissue mass. Christensen & Kockrow (2003), Phillip (2010), Smeltzers & Siddartha (2010).
Carpal tunnel syndrome is an important cause of pain and functional impairment of the hand due to compression of median nerve, usually people affected at 3rd and 4th decades of their life, women affected three times more than men, about 0.5% of general population reports being diagnosed with carpal tunnel syndrome, especially with world filled with computers and video games. Tamir & Zakaria (2016), Young etal, (2018). Carpal tunnel syndrome presented as discomfort, numbness, pins, burning and some times pain, these symptoms tend to be worse at night, in severe case the hand muscle become weakened making difficulty to grip objects. Demiryurek & Gundogdu (2018), Soloman (2010).
Experiments on the effect of positions of fingers, wrist and forearm comparable to the positions common in computer use have shown that carpal tunnel syndrome increases but not to levels generally believed to be harmful. Lewis-Heitkemper (2001). Surprisingly, mean carpal tunnel syndrome levels between 28–33 mmHg where observed when study participants were dragging or clicking with the mouse. Lower values were found with the hand static on the mouse. Keith (2009). Although the experiment has never been repeated the findings indicate a possible pathophysiological mechanism for carpal tunnel syndrome among heavy mouse users.
National Institute of Neurological Disorders & Skin (2014).