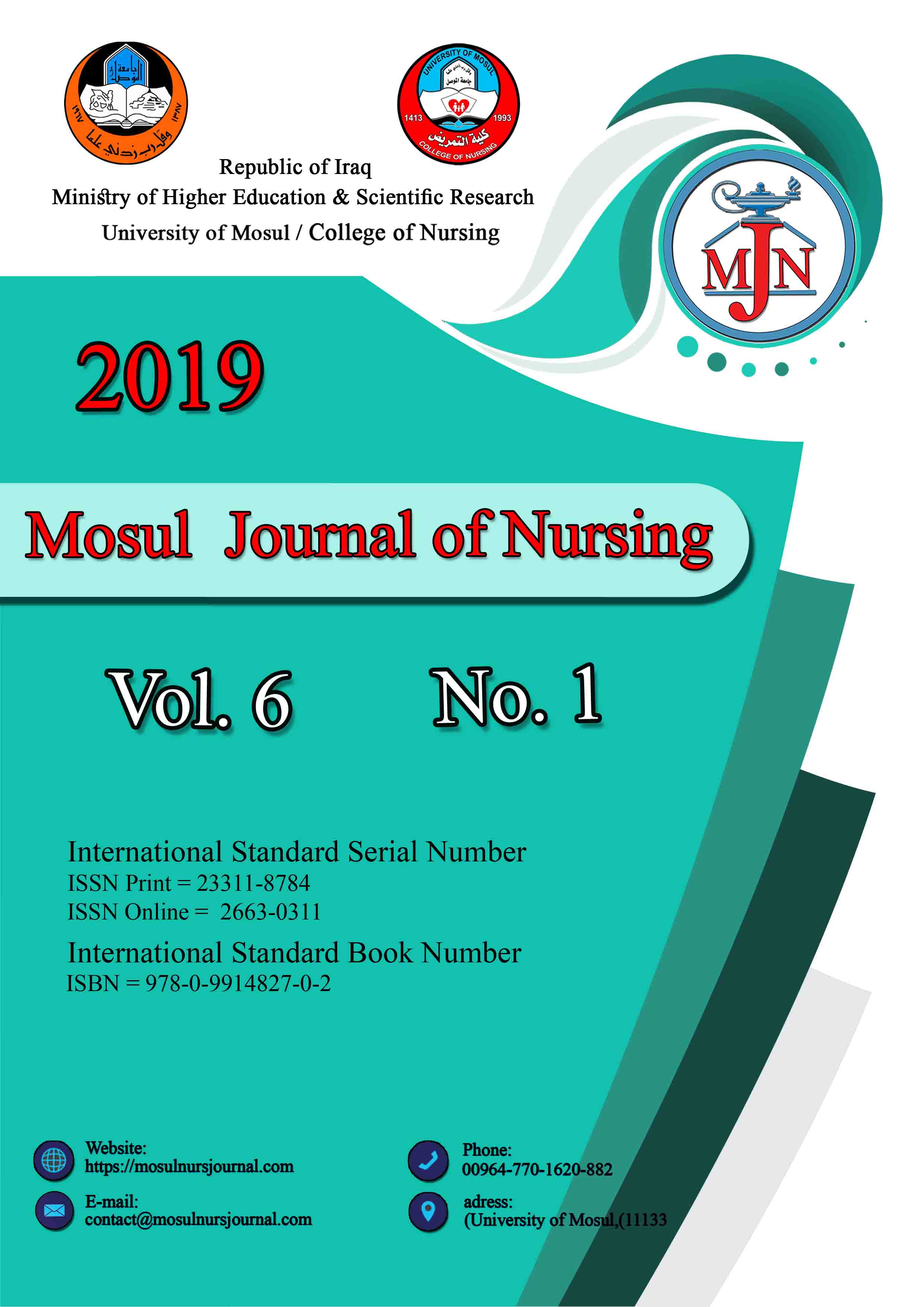 Background and Aim- Blood Pressure Measurement (BPM) is considered a generic skill required in nursing, by a range of health professionals, for effective health assessment. The study aimed to assess nurses' techniques regarding correct way of measurement of blood pressure.
Methods and Materials- A cross-sectional study was conducted on (241) nurses obtained accidently from different wards or units in three teaching hospitals in Mosul City/Iraq during a period "20th of novmber 2017 to 20th of January / 2018". The instruments depended in the study was Global scale of World Health Organization (WHO) that was developed to contain (19) items of two options (Don't do=0 ; Do=1). Observational method was depended by the researchers to collect the data and fulfill the scale while the nurse measured the patient's blood pressure.
Results- The study found that practice level of BP measuring was less than acceptable (42.11%).
Conclusion and Recommendation- The study concluded that whenever, the patient's complaint is critical, the nurse technique of BP measurement ameliorates. It emphasizes on continuous education of all nurses regarding this nursing procedure to check and validate the health status of the patients in order to reduce potential adverse effect.

Background and Aim: The phenomenon of Job Stress remains a reality that touches on different areas of work with inequality. Sources and levels of pressure from one field to another, particularly affecting the humanitarian field as it has proved. Many studies compare careers, under the study of job stress in particular the fields of teaching and nursing as they involve a number of tasks and responsibilities relationships.The study aimed to identify the relationship between job stress and nurses’ demographical characteristics.
Materials and Method: Aquantives descriptive study was applied study to determine job stress for nurses in Akre teaching hospitals in Dohuk city. About 75 nurses participants from two hospitals, Gulan General Teaching Hospital and from Akre General Emergency Teaching Hospital were chosen randomly. A questionnaire is constructed by researchers is divided into two sections, the 1st section is the demographical characteristics of nurses and the 2nd section consists of 23 items about job stress.
Results: The study shows that high percentage of the study population where less than 30 years old and most of them married and male the findings show that 61.3% of nurses where graduated from medical instituted. the study revealed that 61.3% of the sample had less than seven years of experience. The finding displayed that there is a significant difference between job stress among nurs’s age, years experience, Position, Marital status and Salary, While there is no significant difference in relation to Education levels ,Setting, Gender and Hospital..
Conclusion: The results revealed that the young, single and new employed with low salaries nurses suffer from job stress more than the older, married, wide experienced senior nurses. And all the sample have follow almost the same curriculum and instructions to deal with stress in the hospitals.
Recommendations: The researchers reommnded for improving the working conditions of workers in sectors of a humanitarian nature, including a sector education and nursing sector so that their employees can provide better services .

Background and objective: The liver plays an important role and vital that processes nutrients, filters the blood, and fights infections. Irritate or injured in the liver, its function can be affected. Heavy alcohol use, toxins, some medications, and certain medical conditions can cause hepatitis. The study objective is to assess the knowledge’s and practice’s of barbers about occupational safety
Material and methods: Design of the study was cross-sectional descriptive to achieve the objectives of the present study from (17th February 2018) to (30th July 2018). A randomized cross-sectional survey of (60) barber / Mosul City. The sample comprises male and age groups between (15–>45) year. The questionnaire which corrects from the expert's opinion, and used the Coefficient Correlation for items which showed that the reliability estimate for the survey was (r = 0.88) that was significant at (P < 0.05) level.
Result: The study showed a high percentage of barbers aged between (25 – 35) year (30%). The analysis of data revealed that (53.33%) of barbers hadn't good perception toward their knowledge and showed that (58.33%) of barbers haven’t good practices toward their occupational safety. The study founded the significant relationship between demographical data (educational level, marital status and license to practice the profession) and knowledge, also the vital connection between demographical data (license to practice the job) and practices. Conclusion: Our study finds out a marked lower in the information and practices of the barbers working in the Mosul city.
Recommendation: Launching health education programs for professionals who are related to individuals in the community. Behavior exchange campaigns for barbers and focuses on them with the aid of occupational safety committees.

A descriptive study was conducted throughout the period (1rst of November/2007 – 16th of August/2008 in order to assess nurse's knowledge and practice concerning pre and post operative care in six general teaching hospitals in Nineveh governorate. The sample of study included (350) nurses of the nursing staff working in those hospitals. An anonymous questionnaire was constructed to gather data concerning the subject of the study. The content validity of tool is determined through a panel (14) of experts, while the reliability of it was measured by applying on (10) nurses, it was (0.89). The finding of the study indicated that (88.29%) of the sample were males, and (13.14%) were graduates of NursingCollege, and (50.57%) of them have less than five years as a duration in nursing experience. The analysis of findings shows that there is no significant differences according to the variable under study, except that of pre-operative knowledge in respect to age and educational variables of nurses. It shows that the excellent percentage of overall knowledge items was (43.1%), overall practice steps was (5.8%), while it was for all together (24.5%). The study concluded that masculine feature threats the feminine feature of the nursing profession and there is a high shortage of advanced nursing certificates. It recommended to enhance the feminism of the profession by various social and legislative arrangements, and appointment of the advanced nursing certificates as well as nursing faculties in the clinical nursing field.

Background: safe injection practice is the practice that does not harm both health workers and recipient and not produce harmful waste products.
Aim: To determine the injection safety practice among nurses at primary health care centers in Mosul city.
Materials and method: a descriptive study was carried out to include a random sample of 45 nurses selected from 12 primary health care centers of both sides of the city left and right, tool of study depend on observational check list and interview questionnaire.
Results: The study diagnosed both safe and unsafe injection practices which were performed by nurses at their setting of work. Safe practice significantly performed as single use of syringes, using a lot of sizes of syringes, dispose syringes to safety box, close safety box tightly, send safety boxes to buried and incinerated safety boxes, avoid changing safety boxes, specify a team to follow up safety injection measures, continuing education and training on safety injection. Unsafe practice also diagnosed as: don`t washing hands after injection, don`t using gloves when they have skin lesion, filling safety boxes to the top, dispose vials and ampoules to safety box. Poor vaccination coverage with hepatitis (B) vaccine among nurses. The study also found the only significant measures after exposure to needle stick injury were washing hands and notify about the exposure.
Conclusion: The distribution of the nurses in the sample according to age, shows that the majority of them in 40-49 years of age. Presence of male nurses more evident than female, most of them have long work period of twenty-one years and more, the majority of the participant were graduated from nursing school. The study diagnosed both safe and unsafe practices.
Recommendation The study recommends for: improving awareness of both patients and nurses to decrease over use of injection and on achievement of safety, improve vaccination coverage with hepatitis B vaccine and make it obligatory for all health care workers.